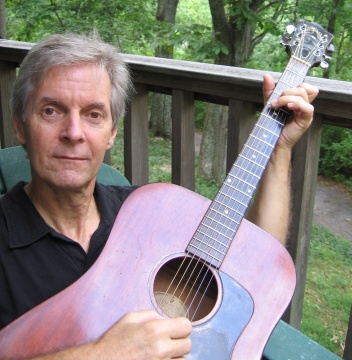 Composer’s Fellowship recipient and teaching artist Bill Haymes conducts professional development workshops nationally, leading teachers through a step-by-step process of rewriting familiar songs in order to explore and explicate a specific core-content topic, and to retain what is learned during that exploration. His basic workshop directly addresses the Common Core mandate to have all subjects support student literacy. He has worked as a teaching artist for over 30 years and is on the

Composer’s Fellowship recipient and teaching artist Bill Haymes conducts professional development workshops nationally, leading teachers through a step-by-step process of rewriting familiar songs in order to explore and explicate a specific core-content topic, and to retain what is learned during that exploration. His basic workshop directly addresses the Common Core mandate to have all subjects support student literacy. He has worked as a teaching artist for over 30 years and is on the artists’ roster for the Utah Arts Council, the Tennessee Arts Commission and the Arkansas Arts Council. His basic workshop — Songwriting for the NOT very musical — uses music and melody as its medium but is at its core a creative writing experience and an instructional technique designed for any classroom teacher, not just music specialists. Participants need no special musical skills. Because the core content topics are usually chosen from the science or history/social science fields, this songwriting process ties in directly with the Common Core mandate to support literacy in all subjects. Teachers in ELA, history/social science, science or technical subjects should find this instructional technique extremely helpful in "using their content area expertise to help students meet the particular challenges of reading, writing, speaking, listening, and language in their respective fields." * *Passage quoted from "http://www.achieve.org/files/CCSSLiteracy.pdf“ Implementing the Common Core Literacy Standards…” Bill’s workshop addresses numerous Common Core standards. ARTIST’S BIOGRAPHY A life-long musician and singer-songwriter Bill Haymes continues to write songs and perform them in Nashville TN. He toured professionally as a singer/songwriter through the 1970s and 1980s while working concurrently as a teaching artist in music with the Arkansas Arts Council’s Artist-in-Education program. As a performer, he played music at over 150 colleges and universities in North America, in various community concerts and folk clubs nationwide, and toured internationally in Brazil, Bolivia, and Paraguay. As a teaching artist, he worked statewide at dozens of Arkansas public schools as an AIE artist in music & songwriting, doing one long-term (nine-week) songwriting residency for the Georgia Arts Council. He has appeared on “A Prairie Home Companion" and several times on “River City Folk.” He also performed at the Kerrville Folk Festival, where—over the years— he was both a New Folk winner and a five-time mainstage performer. He has five studio albums to his credit and received a Composer’s Fellowship from the Arkansas Arts Council, which allowed him to record and release his full-length recording "Anima / Ocean." During most of his one-week teaching artist residencies, he specialized in leading elementary students through the step-by-step process of composing an entire song using their own ideas—from generating a concept and a title, to writing lyrics for the refrain, composing melodies, and finally writing lyrics to the verse(s). For the last five years, Bill has changed his focus to work primarily with teachers. In his basic workshop, he shows teachers how to lead their students in working collaboratively to rewrite familiar songs to explicate and teach specific subject matter. In his advanced workshop — Writing a song from scratch — he shows teachers, step-by-step, how to lead their students in writing an entire original song — music and lyrics — from start to finish. He has give professional development workshops at 11 of the 15 Education Service Cooperatives in Arkansas over the past five years, being invited back repeatedly to several of them. He has also given workshops at colleges and for arts councils. He recently completed a 4-day residency for ArtsFusion at Southern Utah University. He currently lives in Nashville TN, where he is valiantly attempting to learn to speak and read French. Progress is slow.

ARTIST STATEMENT I have always felt that art is based in play. Those who play with sounds and rhythms as children often grow up to be musicians (as I did). I enjoy leading others in writing (or rewriting) songs collaboratively because it is a way for me to share with them the simple but profound pleasure of playing with words and music, sound and rhythm, ideas and images, and also the pleasure of making something new—of creating something from a single thought, a single phrase, or one powerful image.  And, if I am successful, I have also given them the tools to lead others (their students) in doing the same – creating something from (almost) nothing. And thoroughly enjoying the process as they do so.”