Auditions for "See How They Run" 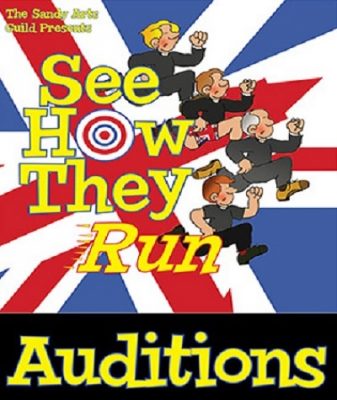 Auditions to be held for “See How They Run”
Auditions for the Sandy Arts Guild’s production of See How They Run will be held on Tuesday, December 6 and Thursday, December 8 from 7-8:30 PM at Sandy City Parks & Rec (440 East 8680 South, Sandy). Callbacks will be Saturday, December 10, 9:30 AM. Jarom Brown is the director. Rehearsals will start the first week of January. The show will perform February 17 through March 4.

To audition, please:
Sign up for an audition time online
(you may also download a PDF version of the audition form)
Download character descriptions
Also:
Come prepared with 30-45 second contemporary comedic monologue
Please be prepared to demonstrate a standard British accent
(cockney accent needed for the part of Ida)
Please bring a photo and resume
All parts are open. Needed are men and woman 16 and older to fill the parts for six men and three women. Reserving your audition time is highly recommended, but is not required.

About the show
See How They Run is set in the idyllic village in England during the 1940s. It’s World War II and the village inhabitants are preparing themselves for the imminent threat of Nazi invasion. Meanwhile, resident spinster, Miss Skillon, becomes convinced that her beloved vicar’s actress wife is carrying on with a friend and attempts to expose her. Add an escaped German prisoner of war, a handsome actor, the visiting Bishop of Lax, a rotund locum priest and some meddling neighbors and hilarious confusion and mayhem result.
Again, all auditions will be held at Sandy City Parks & Rec (440 East 8680 South, Sandy) and while reserving your audition time is recommended, it is not required. To reserve your audition time online, please use the “See How They Run” audition form.