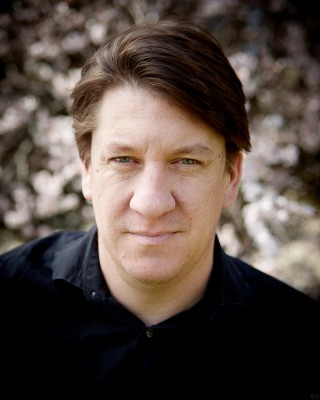 M Todd Gallowglas is a professional storyteller (like on a stage with a show in front of real people) and the bestselling author of the Tears of Rage and Halloween Jack series.

As a child, Todd wished that he could be a left-handed red head, because he thought they were the most special and different people in the world. Because he was a brown-haired righty, life had forced him to create his own path to being special and different by making up stories of fantastical worlds of adventure. He even believed in these worlds so completely, that several of his teachers questioned whether he knew the difference between fantasy and reality. The jury is still out.

He wrote his first fantasy story for a creative writing assignment in the third grade. Ever since, he’s loved spinning tales that take the reader off to the far future or away mystical worlds. High school was a convenient quiet place to hone the craft of writing adventure stories…while he should have been paying attention in class. Todd received a BA in Creative Writing from San Francisco State University. Throughout his time in at SFSU, several teachers tried to steer him away from writing that nasty “genre” stuff. However, they underestimated just how much Todd’s brain is hard-wired for telling tales of the magical and fantastic, and their efforts to turn him to literary fiction came to nothing.

After graduating, Todd returned to his career as professional storyteller at Renaissance faires and Celtic festivals. His first professional sale was to Fantasy Flight Games, and he has a run of stories for their Call of Chthulu game line. His story “The Half-Faced Man” received an honorable mention from the Writers of the Future contest. Embracing the paradigm changes sweeping through the publishing industry, M Todd Gallowglas used his storytelling show as a platform to launch his self-published writing career. Nearly all of his eBooks have been Amazon bestsellers, and First Chosen spent most of 2012 on Amazon’s Dark Fantasy and Fantasy Series lists.

He currently lives with his wife, three children, more pets than they need, and enough imaginary friends to provide playmates for several crowded kindergarten classes. He is currently corrupting his children by raising them with a rich education of geek culture. And still, as busy as he is, he manages to squeeze in time for some old-school table top gaming and airsoft battles on the weekends (because it’s not as messy as paintball). Shiny!

Find out more about M Todd Gallowglas, his books, and read some of his rants, head over to his official website: mtoddgallowglas.com