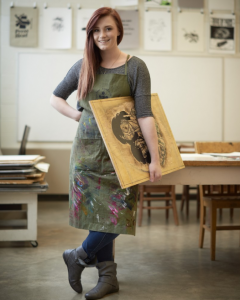 Sommer Baisch is a Printmaker and Art Educator currently residing in Riverton, Utah. She received an Associates of Science from Snow College, in Ephraim, Utah, in 2014. She is currently finishing up her BFA from Utah State University, with a dual emphasis in Printmaking and Art Education. Her current body of work primarily consists of large, multi-color, reductive woodcuts. The content of her work considers gender roles in the context of a relatively conservative culture, with a particular focus on modesty and the positive and negative connotations it gives to a woman’s identity.

ARTIST STATEMENT
My work takes a critical view of social and cultural expectations of women, by exploring the ways in which traditional female roles have evolved; new context and environment, same constrictions and stereotypes. The narratives depicted in my multi-color, reductive woodcuts are influenced by my upbringing in the conservative and religious community of Utah, with a close observation of the positive and negative connotations that the concept of modesty has on a woman’s identity.

I use narratives involving human figures to convey my point of view, arranging them in ways that allows and encourages the viewer stop and consider what is transpiring. The figures are manipulated in ways that question the standard portrayal of femininity; I enjoy allowing my heroines to be strong, robust, and reminiscent of classical figures (what may be considered non-ideal by today’s standards). I take into consideration the ways in which my subjects may perhaps feel internal conflicts, and try to express that feeling through figural compositions.