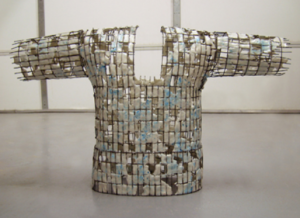 When sculptor Jen Harmon Allen married in 2002, her domestic instincts kicked in as she embraced the idealistic fantasy (and expectation) of being a homemaker. It’s common for women artists to explore this lifestyle shift: an identity change manifests itself in their work as they delve into household and maternal subjects. But Harmon Allen’s work didn’t experience any development of this kind. In fact, her art experienced a hiatus.

It wasn’t until a few years ago that Harmon Allen began to produce again. She credits her husband for her drive to return to the studio. “He saw a need I had and recognized something in me that I didn’t” she says. “The maternal thing is a big part of me, but he knew I was happier when I was doing my artwork.” She did have a need to revisit that creative and academic part of herself, but the initial reason for her return to art was a practical one.

Almost four years ago, Harmon Allen’s husband suffered a stroke, and ever since he’s struggled to regain his health. Their family has suffered financially and Allen had to find a way to make money. In the past, her art had brought in more money than any other work she had done so Harmon Allen found herself in a place where she needed to create opportunities for her art.