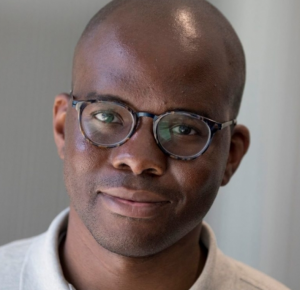 Tope Folarin was born Oluwabusayo Temitope Folarin in Ogden, Utah, to Nigerian immigrants. He lived in various cities in northern Utah, including Bountiful and Salt Lake City, before he moved to Texas at the age of 14 with his parents and four younger siblings. After graduating high school, he enrolled at Morehouse College, studying for a year and a half as an exchange student, first at Bates College, then at the University of Cape Town in South Africa. He graduated from Morehouse in 2004, then attended the University of Oxford as a Rhodes Scholar, where he earned a masters degree in African Studies and another masters degree in Comparative Social Policy in 2006.

In 2013 Folarin became the first writer based outside Africa to win the Caine Prize for his short story “Miracle.” He was shortlisted again for the prize in 2016, and was named to the Africa39 list of the most promising African writers under 40. His first novel, A Particular Kind of Black Man, examines the life of Tunde Akintola, a Nigerian American from a small Utah town who struggles to reconcile his parents’ Nigerian cultural identity with the surrounding white Mormon culture of Utah.