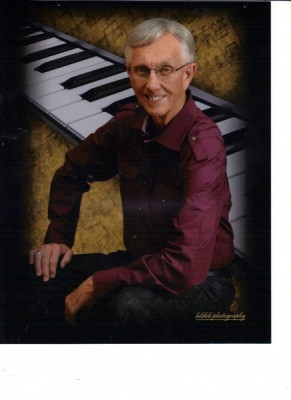 Concert Pianist – There is something close to magic in the sounds of the way Dick Barton plays the piano. It creates the mood of the day or night by its endless range by just the touch of talented hands. The hands of Dick plays the nostaligic moods of Broadway, movies, ragtime and semi-classical as his fingers travel up and down the keyboard, taking his audience to new highs. Dicks playing is unique as he offers his own frills and reels in every piece. He lets the spirit of the moment lead him, making each piece his own. Dick never nplays a piece the same way twice, but still adds the nostalgia, which leaves the audience begging for more. He also uses body language in performing. Dick graduated from the MCune Conservatory of Music in Salt Lake City and the went on to the University of Utah majoring in music. Dick has released a two CD’s. One entitled "Highlights of Broadway, Movies and Oidies" and the other "One Moment In Time". Is in the process of releasing another one this fall. Dick has played at the St. George Tabernacle, St. George Opera House, the Grand Stage at the Cox Performing Art Center and the Grand Theater at The Eccles Performing Arts Bldg. on the Dixie State College campus. He has also played at weddings supper clubs, various community and political gatherings and is now a regular appearing at the Encore RV Resort in St. George, Utah. He is also being considered to be one of the performers for the "Celebrity Concert Series" for the 2012-13 season. Dick plays for four Assisted Living Centers.