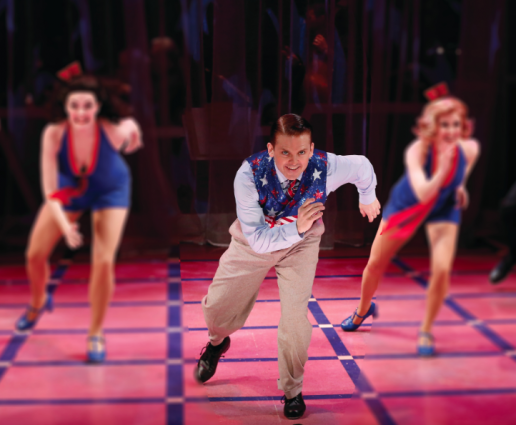 (SALT LAKE CITY, UT)— With July 4th around the corner, the Broadway-bound production of Cagney, based on the life of “Yankee Doodle Dandy” star Academy Award winner James Cagney, has completed its casting and returns to the stage, opening Pioneer Theatre Company’s (PTC) season this fall. The production will run from September 20, 2019 through October 5, 2019. Tickets for this highly-anticipated production can now be purchased as a part of a season subscription by calling 801-581-6961 or visiting pioneertheatre.org.

“We’re ecstatic to present this exclusive first look at the Broadway production of Cagney,” said PTC Artistic Director KAREN AZENBERG. “Salt Lake has such a richly vibrant arts community and we couldn’t be happier to bring the ‘Great White Way’ out West.” Added PTC Managing Director
CHRISTOPHER MASSIMINE, “What an incredible opportunity to honor the memory of a Hollywood icon and bring his legacy to the masses. We’re delighted to be part of that journey.”

Cagney, a biographical musical based on ‘Hollywood’s tough guy in tap shoes,’ played an award-winning Off Broadway run, presented first at the York Theatre, followed by a successful transfer to the Westside Theatre, and a limited engagement in Los Angeles. The Broadway production of Cagney will be produced by RIKI KANE LARIMER (Enter Laughing, Smokey Joe’s Café, Gigi, On the Town) and KATE EDELMAN JOHNSON (Wyatt Earp: Return to Tombstone).

Currently starring on Broadway in Frozen, ROBERT CREIGHTON
reprises the title role, for which he was awarded the Fred Astaire Award. Creighton also co-authored the music and lyrics for Cagney alongside
CHRISTOPHER McGOVERN (Vocal Arrangements: Ionescopade, The Jazz Singer), with book by PETER COLLEY (The War Show, The Donnellys, When the Reaper Calls). BILL CASTELLINO (Desperate Measures, Storyville, Ionescopade) and JOSHUA BERGASSE (Charlie and the Chocolate Factory, Gigi, On the Town) will return to the helm as director and choreographer, respectively.

“Cagney started as an idea and then a passion in acting school—not only because of my obsession over how powerful and versatile James Cagney was on screen, but because his story was a compelling one: a story of the American dream, one that resonates more today than ever,” said Creighton. “This show started as a four-person musical 12 years ago and grew into a 502 performance off-Broadway hit, and is now a 12-person Broadway-bound show. Mr. Cagney’s story warranted a more expansive, deeper telling and we are thrilled and grateful to share that with Salt Lake City!”

DARRIN BAKER will play Jack Warner, Cagney’s chief adversary and CEO of Warner Brothers. Baker has had a long career in Broadway including roles in Tarzan, Wonderful Town, Jackie Mason’s Laughing Room Only, Footloose and The Scarlet Pimpernel.

Now celebrating its 58th season, the award-winning Pioneer Theatre Company (PTC) is Utah’s Premiere Professional Theatre and a leading arts organization of the West. Led by Artistic Director Karen Azenberg and Managing Director Christopher Massimine, PTC promotes community building and education though presenting world-class productions; developing new socially resonant and universally impactful work; hosting talks, lectures, and workshops that engage a versatile and inclusive demographic, while celebrating diversity in culture and society; and serving as the connecting bridge between art and scholarship as an affiliate of the University of Utah.