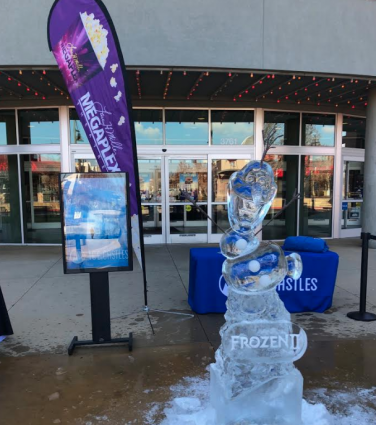 Sandy, UT (November 27, 2019) – According to movie industry sources, two Utah Megaplex Theatres locations ranked in the top 10 among the 4,440 theatres in the United States and Canada for the opening of Disney’s animated blockbuster, Frozen 2. Megaplex Theatres at Jordan Commons and The District in South Jordan ranked eighth and ninth respectively for the sequel to the 2013 film. Only larger cities with higher movie ticket prices outpaced Utah’s Megaplex Theatres.  The blockbuster sequel beat expectations with a $130 million domestic box office opening and more than a quarter of a billion dollars in the first few days leading into the long Thanksgiving holiday weekend.

“Once again, Utah movie fans celebrated a big movie opening in legendary fashion at Megaplex Theatres,” said Blake Andersen, president of Megaplex Theatres. “Frozen 2 is a great way to start a spectacular run of family-friendly movies that will play at Megaplex between Thanksgiving and New Year’s Day.”

With snow in the forecast for much of the state, and playing off of a familiar theme in the Frozen franchise, Megaplex Theatres is asking fans if they want to “build a snowman” and share the photo on the Megaplex Facebook, Instagram, or Twitter accounts.   If weather is not cooperating, guests are invited to use their imaginations to post a photo that would make Olaf proud.  To qualify, follow any of the Megaplex Theatres social media pages and use the hashtag #MegaplexFrozen.

Megaplex Theatres operates 16 locations across Utah and southern Nevada with a total of 182 screens, including five IMAX screens. Megaplex also operates the only laser projection enabled auditorium in Utah.

Founded by the late Larry H. Miller, Megaplex Theatres are frequently among the top grossing in the nation and recognized as Utah’s favorite movie theatres. In addition, Megaplex Theatres feature regular and large-format movie screens, dinner and a movie gift options, conference and auditorium rental, and an industry-leading guest services team. Megaplex Theatres show times and other group information may be found on the web at www.MegaplexTheatres.com  or by calling (801) 304-4545. Guests are also invited to follow their favorite films on Facebook at www.facebook.com/MegaplexTheatres and on Twitter @MegaplexTheatre.