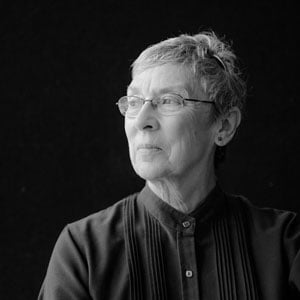 Linda Smith - founder of the Repertory Dance Theatre Linda has been a performer, teacher, choreographer, writer, producer for RDT since 1966. Her pursuits have led to the development of the Rose Wagner Performing Arts…

Linda has been a performer, teacher, choreographer, writer, producer for RDT since 1966. Her pursuits have led to the development of the Rose Wagner Performing Arts Center and the RDT Community School, to providing over 400 commissions for established and emerging choreographers, and to the creation of multi-disciplinary activities that focus on the dance history, the environment, social issues, multi-ethnic history, and sustainability. She has taught in over 1500 schools bringing the magic of dance to students and teachers with her unique demonstrations, lectures, classes and professional development workshops. As a performer, teacher, director and administrator, Linda has dedicated her life to finding ways to make the arts relevant and to communicating the value of dance in the life of a community.

Linda received her BFA in dance in 1964 from the University of Utah. She has received numerous honors including “Honors in the Arts” awards from the Salt Lake Chamber of Commerce, the “Outstanding Achievement Award in Art” from the YWCA, “Community Builders” Award from Utah Women’s Alliance for Building Community, recognition by Utah Business Magazine as one of 30 Utah Visionaries,” and The College of Fine Arts Distinguished Alumni Award from the U of U. 15 Bytes Selected Linda as One of Utah’s 15 for 2018: The State’s Most Influential Artists Award (2019). 2019 Utah Business Women of the Year; UNA’s 2019 Outstanding Nonprofit Leader of the year.

She is most at home encouraging audiences of all ages to imagine, create and communicate with the language of movement.

Thank you for this wonderful honor. I am very touched.

When my son, Evan, was about 6 years old, he came home from a soccer game with a trophy, and he ask me, “Have you ever gotten a trophy for dance?”

I told him no, and he gave me a pitiful look and said, “That is really too bad. Someday, I hope that you get one.”

This year, my cup runith over. Maybe the fates are telling me something. As I approach my 80th, I get a lot of questions about when are you going to retire?

I generally answer, “Why would I want to do that?”

I have the most exciting, challenging, interesting job anyone could ask for.

I work with the most creative, inventive, artistic, amazing, brilliant, funny and dedicated individuals on the planet…what a joy…what a privilege.

54 years ago, I was given an amazing gift …and a great responsibility.

It has been my life’s work and my greatest challenge.

In 1966, Repertory Dance Theatre began as a unique experiment.

Inspired by Virginia Tanner, a partnership was formed between the Rockefeller Foundation, the University of Utah and the Salt Lake Community.

A $750,000 grant from the Rockefeller Foundation was awarded to create a professional modern dance repertory company in Utah that would:

Decentralize the arts in America.
Preserve the best in historic and contemporary modern dance
Create new work
Nurture young choreographers
Develop an appreciation for dance in schools
Take professional dance to regions outside the metropolitan areas of the country.

It was a tall order and we didn’t want to fail.

In 1966, RDT was a revolutionary dance company….and it still is today.

Over the years, RDT has been concerned with MAKING THE ARTS RELEVANT in the community. We develop artistic themes that promote greater awareness of the relationship we have with each other,  that connect with other disciplines, with history, social issues, and the environment. We want to use dance to inspire, educate, and to heal.

My life with RDT has been an amazing journey. There has been lots to learn.  RDT is my university.

IMPORTANT AND MEMOABLE LESSONS I HAVE LEARNED

COMMITMENT: WHY DO WE DO IT?  In the 1980’s, Jennifer Scanlon of the Jose Limon Company shared an inspiring story. She said that the Limon Company was touring in a rural part of the U S and once again they had traveled through a snow storm to get to the cold theater, and then performed for a very small fee, while dancing on concrete without the proper stage lighting, for a very small audience.

Jennifer confronted Jose and said, ”Why are we doing this? How can you continue to endure these indignities?”  Jose said, ”Jennifer, we can’t let those other guys win.”

TEAMWORK: In the 1980’s and 90’s, I performed a work called “Nine Person Precision Ball Passing” by Charles Moulton. As you might imagine it required 9 dancers… to pass 9 balls… with precision.

Before every performance, I was terrified.  I could not sleep the night before a show. I got sick at my stomach. I didn’t want to be the person that dropped the ball.  It took a long time for me to get comfortable performing the piece. And then, I began to realize that the audience was fascinated…not only when we had a perfect run and nobody dropped a ball,  but fascinated when someone did drop a ball and then, another ball would magically appear and the dancers managed to get back in sync with the rhythmic pattern.

Make sure that you have a team that is committed to what you are doing.  Learn to trust your team.

If I am hit by the cross-town bus, RDT could continue without a hitch.

WHAT DO RDT DANCERS VALUE: Once when RDT was struggling with funding, the dancers were given some choices. We could go on tour without having per diem or we could use that money to work with a guest choreographer that we adored. Guess which we chose to do?

Peanut butter and jelly for three weeks on tour.

YOU NEVER KNOW:   In 1976, RDT toured Alaska in February. It was 50 degrees below. We were booked to perform in the school gym of a very small, remote town of Glennallen, with a population of about 350 people. We didn’t expect a large audience, but over 400 people attended.

Some surprise guests attended.  A large group of “pipe liners” (they were laborers building the Trans Alaska  oil and gas pipe-line outside of Anchorage)  came in a group and looked like giants. They all had bushy beards and wore huge white “bunny suits” and parkas. We dancers looked out at the audience before the show and said,  “They are going to hate us.”

But after the performance, practically the entire audience stayed to talk. Even the pipe-liners stayed.  One woman came up to me and said, “We know how difficult it must have been for you to get here. Thank you for performing for us and thank you for not dancing down to us. Just because we live in a small town doesn’t mean that we have small minds.”

BE NICE TO EVERYONE:

I thought that he was a vagrant looking for a place to sleep.

I wondered why he kept coming into the old warehouse on third South where RDT was rehearsing. I politely confronted him to question his motives and welcomed him to watch rehearsals anytime that he wished.

I learned that his late wife had been a vaudeville dancer.

I leaned that his old family home had been located right on the spot where our dancers were rehearsing.

His wife was Jeanne. His sister, Leona, and his mother…Rose.

No, he wasn’t a homeless vagrant. He was Izzy Wagner, a multi-millionaire.

He caught our vision of creating an Arts Center in downtown SLC.

I’m so glad that I didn’t throw him out of rehearsal.

UTAH IS A SOURCE OF INSPIRATION…LISTEN TO THIS “PLACE”

In May 2017, RDT dancers embarked on a mission to gather information and inspiration for choreography.  We wanted to experience the energy and spirit of Bears Ears National Monument. As artists, we wanted to allow the history, the sights and sounds of a landscape to literally “move us.”

Nineteen people (including three Dine Navajo guides) embarked on an incredible week-long journey into the Monument. The native elders asked us to “listen” to the land. They asked us to respect their history and their culture. They asked us to use our senses to gather the stories that are embedded in the earth, in the plants, and in the rocks.

We gathered inspiration for daily improvisation sessions, and the things we saw, heard, sensed and experienced were translated into movement and choreography.

The experience ….“changed us.”

DANCE IS A POWERFUL THING

RDT has always made Art-In-Education part of our mission.

In the 1970’s the NEA awarded us funding to help develop a national program to develop residency programs and put artists in the schools.

There were national workshops that brought school principals, teachers and dance artists together to help educators see the value of embracing the arts… the value of using movement as a teaching tool. During one of the nationwide workshops in Durham, North Carolina,

I had a profound “Ah-haw moment.

We called some of the participants the “movers” (that was the movement specialists) and the “non-movers” were those who had never done anything like what we put them through.

During the culminating event of the week-long workshop, everyone gathered to celebrate. It was time to boogie. A large circle was made. Seductive music was played. One by one, each participant went to the center of the circle to express themselves in movement.

Gradually she began to move…she closed her eyes, she lifted her arms and began to sway. She was in a kind of trance and she was beautiful. Finally she broke down and began to cry, and we all rushed in to comfort her. And then I heard her say,

“It’s OK. Don’t be concerned. I am alright. It is just the first time I have ever felt joy”

Well, I have been an RDT dancer, teacher, choreographer, writer, administrator, producer, psychiatrist, and I also volunteer to the wash costumes and take out the trash. Whatever needs to be done, I will try and do it or find someone who can do it better than I.

You will know what I mean when I say, “RDT runs on passion.”

My passion comes from remembering the experiences that helped me understand the power of the arts…how the arts can connect people…inspire people…unite people…and even heal people.

My passion also comes from listening to the ghosts. We are all part of a long lineage of arts and culture champions. The artistic pioneers, the trailblazers, and the courageous artists and administrator who laid the groundwork and took some blows to open the doors for us.

Those ghosts can give you courage. They remind us that we must continue to make sure that the arts are firmly embedded into the life of our community.

After 54 years, I offer some advice to anyone in this room who starts to have doubts about the value of what they do. Don’t think too hard about it, just continue to do it.

This community is lucky to have so many courageous “doers.”

We build community one person at a time because we know that,

”We can’t let those other guys win.”