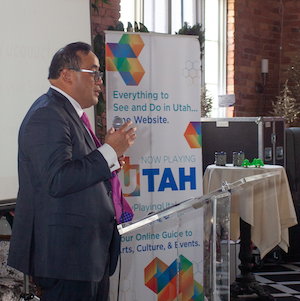 Max Chang is a Utahns for Culture 2019 Special Honoree

Max Chang: Chang was born and raised in Millcreek, Utah. He received a bachelor’s degree in political science from the University of California, Berkeley and an MBA from The Wharton School of Business at the…

Chang was born and raised in Millcreek, Utah. He received a bachelor’s degree in political science from the University of California, Berkeley and an MBA from The Wharton School of Business at the University of Pennsylvania with a dual major in Marketing and Entrepreneurial Management. Currently, he is the Chief Operating Officer and partner of American Estate Management Corporation.

Max is a board member of the Golden Spike Foundation, also known as Spike 150. Max’s primary charge was to ensure the recognition and appreciation of the contributions of the Chinese railroad worker to not only to the Transcontinental Railroad but also Utah and America’s history during this year’s sesquicentennial celebration. Max emphasized using the arts as a vehicle to tell the untold story of the Chinese railroad workers and many others who contributed to the greatest engineering achievement of the 19th Century.

Over the past ten years, Max has served on numerous arts and cultural related boards. He is currently the Board Chair of the Salt Lake County Zoo Arts and Parks Tier 1 Advisory Board and on the Governor’s Mansion Artist Awards Committee. He is a past board member of Natural History Museum of Utah, Salt Lake County Center for the Arts (now Arts and Culture), and Salt Lake County Cultural Facilities Support Program. He also has served on the boards of Karl Malone Foundation for Kids, Holladay Preschool and is currently the Treasurer of the Oakridge Elementary Parent Teachers.

Max believes that the arts, culture and humanities can help communities to better lead for the present and future. More importantly, they evoke empathy, inspire ingenuity and enable multi-dimensional vision, all of which will promote critical thinking, problem solving and creation in a multiple of fields.

Max lives in Millcreek with his wife, Edee, and their two daughters, Genevieve and Gisele.

Thank you, Utah Cultural Alliance Board of Directors and Crystal for this amazing honor and congratulations to all of today’s other honorees.  It’s truly humbling to be in your company.

They say hindsight is 20-20.  Yet, when I look back at the past two years starting when Jill Love invited me to join the Spike 150 commission and later the executive committee with the dream team of Doug Foxley, Spencer Stokes, Aimee McConkie, Chris Robinson and Ross Peterson to celebrate the sesquicentennial anniversary of the completion of the nation’s first transcontinental railroad, I still cannot believe my eyes.

What started as a simple goal of properly recognizing the contribution of Chinese railroad workers to the greatest engineering feat of the 19th century turned into one of the most incredible and amazing works of collaboration I have ever witnessed in Utah including that of the 2002 Olympics.  After all, our Spike 150 Co-Chair, Doug Foxley, did pronounce, “move over winter Olympics, it’s time to bring home the gold – the golden spike.”

What I see is an unprecedented coalescence of the public and private sector; foundations and individuals; business and legal professionals and educators; friends and family; and the incredible arts organizations and artists in our midst – all wanting to help widen the lens of history to include everyone who made this railroad a reality and put Utah on the map as the crossroads of the west.  Many of whom are here today ranging from my wife, Edee, and parents, Po and Beatrice Chang as well as friends I’ve known since the 7th grade to new and everlasting friends from the Spike 150 universe.

I would like to give a special thanks Salt Lake County and Holly Yocom who for the past 10 years have entrusted me to sit on three separate boards. Through these boards, in particular the ZAP Tier 1 Advisory Board, I became acquainted with some of the best arts and culture organizations not just in the county but the country. Our partnership with the Chinese Railroad Workers Descendants Association led by Judge Michael Kwan never wavered from the goal of honoring his ancestors-the Chinese railroad worker, despite some lofty obstacles thrown at us.

The Utah Museum of Fine Arts told the Chinese story by asking visitors to look for who’s missing in the famed Russell and Hart photographs. Spy Hop and our Poet Laureate, Paisley Rekdal, gave voices to the voiceless.  Zhi Lin and the Kimball Art Center helps us visualize the brutal and unforgiving terrain the workers had to endure. Utah Opera exposed the invisible with original works. Thanks to Salt Lake Acting Company for bringing in David Henry Hwang’s The Dance and the Railroad and Salt Lake City Library for Richard Chang’s Citizen Wong.

Over twenty years ago while starring in Miss Saigon on Broadway, composer/lyricist Jason Ma received a gift in the form of a melody of two lovers signing in the mountains but longing for their own mountains.  This persistent melody grew to what would eventually become centerpiece song of the beautiful but tragic story of Gold Mountain. With the help of so many, including those offering without my even asking, Gold Mountain premiered at the Regent Street Black Box Theater just a stone’s throw away from Plum Alley where in 1869 workers from the Transcontinental Railroad built a Chinatown and now sits a parking structure.

Our grand finale was with the Utah Symphony’s performance of a newly commissioned work, Transcend, by composer Zhou Tian.  Starting with the bombastic rhythm of nitroglycerin versus granite, Transcend concludes with a chorus of strings, woodwinds, brass and percussion vocalizing D. O. N. E. in Morse code while symbolizing the healing of a Civil War-torn nation.

Can you imagine that Salt Lake City, not New York, not San Francisco, is the only city in America to ever have four original works by four playwrights and composers of Chinese descent to play within a week of each other?  Give yourself a pat on the back, Salt Lake!

The greatest impact was in the classroom. Oakridge Elementary, led by Principal Christine Drummond, utilizes a cross-discipline methodology with immersive arts programing.  I provided the history on Chinese railroad workers to the students and then the experts added the art.

Through Lisa Cluff and the Art Works for Kids Foundation, Carrie Wetzel’s fourth grade class wrote and illustrated their own graphic novel, Where the Railroad Ends, which imagines how the Champagne photo could have and should have transpired.

Kelsey Hokansen’s fourth grade class with the guidance of Jerry Rapier and Plan B Theater created a play within a play to address the conundrum of how to honor the Chinese railroad workers without dishonoring them through cheap, old and tired tricks of imitation.

Emily Kordakis’ fourth grade class under the conduction of Victoria Petro-Eschler and Nathanial Eschler of Salty Cricket visually and acoustically showed how the Chinese railroad workers dug the longest tunnel in the Sierras by going in four directions at once.

Last month, the fourth grade through Tanner Dance choreographed and performed a dance based on the Transcontinental Railroad and through their music specialist from the Beverly Taylor Sorenson Foundation created their own music and sang songs about the railroad.

Finally, Jason Ma, not only prepared a special arrangement of his song Fuse Runner from Gold Mountain in order for Suzy Merrill’s class to perform and learn the dangers and discrimination the Chinese faced, but he also went into the classroom to teach the students.

These children along with nearly 1,200 students along the Wasatch Front I encountered were eager learners, engaging and empathetic.  They demonstrated critical thinking, a trait sorely lacking by many adults in leadership today. Finally, they taught me that you don’t have to dumb down history for them to learn. Just add art.

Aristotle is well known for his mimesis, “Art imitates life.” Exactly one score after the completion of the Transcontinental Railroad, Oscar Wilde in his essay, The Decay of Lying, wrote his anti-mimesis, “Life imitates art.”

I have learned from this village, this state, this incredible integrated arts community what the true relationship is between art and life and it is not imitation.

The true relationship between art and life is empathy.