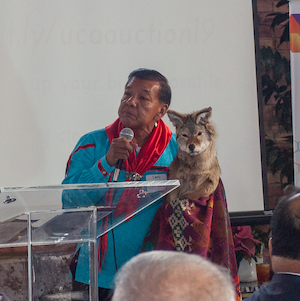 Larry Cesspooch-Suhspuech is a Utahns for Culture 2019 Special Honoree

Larry Cesspooch-Suhspuech:  Ute Storyteller/Spiritual Leader uses film, music, and storytelling to covey his stories. He grew up on the Uintah & Ouray Ute Reservation in Northeastern Utah. He is a Vietnam Veterans. After the service…

Ute Storyteller/Spiritual Leader uses film, music, and storytelling to covey his stories. He grew up on the Uintah & Ouray Ute Reservation in Northeastern Utah. He is a Vietnam Veterans. After the service he attended the Institute of American Indian Arts for his AA, then went to the Anthropology Film Center for his BA, both in Santa Fe, N.M.

Larry maintains a Sweat Lodge holding bi-weekly ceremonies and is one of the Spiritual Leaders for his Noohchew, Ute people. Larry has been involved with the protection of Bear Ears National Monument. Cesspooch is often called by his Native Community to give invocations for many public activities.

He served over twelve years as a Utah Humanities Public Square Speaker, presenting “Utah History Through Native Eyes,” as one of his many topics. He is often called on by his tribe to represent their history and view point. Cesspooch has served as a Board Member for the Center for Documentary Arts & Expression in Salt Lake City since the early 90’s.

Larry created the “Ute Tribe Audio-Visual Department,” one of the first tribal production groups in the states in ‘79. They produced over 600 films for the Ute Indian Tribe on the culture, language and history. During his 23-year tenure, Cesspooch also served as the Editor for the “Ute Bulletin” tribal newspaper, and was Public Relations Director for the tribe 90-2002.

The filmmaker left the tribe in 2002 to create his own production company, “Through Native Eyes Productions.” His present film project, “Mat Warriors” is about the Ute Tribe’s Co-Ed Wrestling Club. He had a short Claymation film in the 1994 and been a member of the Sundance Institute Family since conducting Blessing Ceremonies each summer for the various film and theater labs.

Cesspooch continues to preserve Ute history through UTETUBE.xyz, the Ute Tribe’s Photo & Video Digital Archive on line. Eventually the website will have 250 of the videos produced for the tribe and over 500 of the tribe’s Photo Archive.