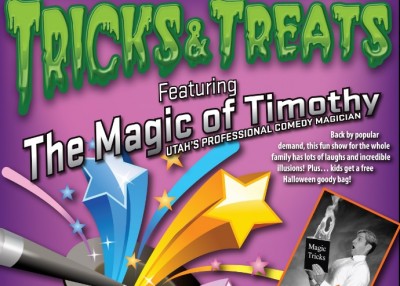 Tricks and Treats Featuring the Magic of Timothy

It’s the season for tricks and treats, and this event has both as Utah’s own professional comedy magician Timothy Riggs is back for his popular annual show.

Riggs has performed in amusement parks, fairs, stadiums, parties, night clubs and magic conventions. He created a full-length stage show while attending Snow College, and  even as a missionary for The Church of Jesus Christ of Latter-day Saints, Riggs performed magic shows for community service. Among his service has been entertaining as a magician at the University of Utah’s children’s hospital.

SCERA Center for the Arts