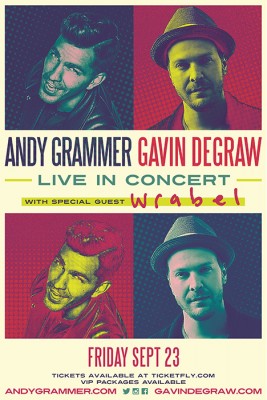 Andy Grammer
From hustling street performer on Santa Monica’s Third Street Promenade to multi-platinum selling recording artist, it seems like just yesterday that Andy Grammer was discovered by manager Ben Singer and signed to S-Curve Records. With his 2011 self-titled debut album, Grammer became the first male pop star in a decade to reach the Top 10 at Adult Pop Radio on his first two singles, “Keep Your Head Up” and “Fine By Me,” certified Platinum and Gold respectively, selling more than 1.5 million downloads combined.

In just a few short years, Grammer has sold over 250,000 albums, played to sold-out venues nationwide, performed onstage with Taylor Swift, Train, and Colbie Caillat, appeared on an array of national TV shows, and received major song placements in film and TV.

In 2014, Grammer released his second album, ‘Magazines or Novels,’ which included the multi-platinum hit single “Honey, I’m Good” that sold over 3 million copies and climbed to #1 on the Adult Pop Radio charts.

Gavin DeGraw
Multi-platinum recording artist Gavin DeGraw is no stranger to the top of the charts. The Grammy nominated singer/songwriter first broke through with the 2003 release of his debut album, Chariot, which sold over a million copies, earned platinum certification, and yielded three hit singles: “I Don’t Want To Be,” “Follow Through,” and the title-track, “Chariot.” Gavin’s self-titled second album debuted at No. 1 on the digital sales chart and at No. 7 on Billboard’s Top 200 album chart in 2008, earning Gavin his first Top 10 album. It spawned the hit singles “In Love With A Girl,” which Billboard dubbed “a rocking homerun,” and the gold-certified “We Belong Together.” In 2009, Gavin released Free as a gift to his die-hard fans clamoring for recorded versions of Gavin’s live favorites. DeGraw released his third studio album, Sweeter, in September 2011. The album’s first single, “Not Over You,” co-written with OneRepublic’s Ryan Tedder, reached #1 on the Hot AC charts, was a top 10 hit on Top 40, and was certified double platinum. DeGraw’s acclaimed, fourth studio album, Make A Move, was released in October 2013 to rave reviews. Shortly thereafter he was nominated for his first Grammy for “We Both Know,” a song he co-wrote with Colbie Calliat for the 2013 film “Safe Haven.” FINEST HOUR: THE BEST OF GAVIN DEGRAW was released last October via RCA Records featuring two new songs, as well as his most renowned and notable hits to date, including “Not Over You,” “We Belong Together,” and “I Don’t Wanna Be.” Currently, Gavin is in the studio finishing another full length album of all new songs, which is slated for release in Fall 2016. For more information visit www.gavindegraw.com.