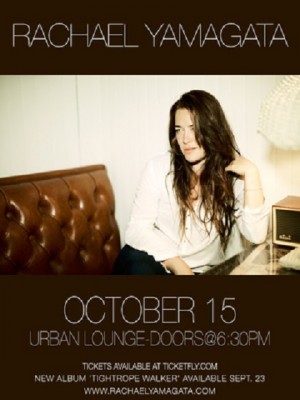 Rachael Yamagata is not your ordinary singer/songwriter. Yes, she has released numerous albums; had record label deals; toured the world multiple times with sell-out concerts; built a loyal and ever-growing fan base; earned her place as a media ‘darling’; made appearances on Jay Leno, Conan O’Brian, Carson Daly, 30 Rock, One Life to Live and The O.C.; been an NPR profiled artist; made a cameo appearance as herself in Sony Pictures To Write Love on Her Arms; had song placements in hit TV shows including NCIS: New Orleans, Vampire Diaries, Grey’s Anatomy, Alias, How I Met Your Mother, and in and Hollywood movies including Hope Springs, Prime, Monster-in-Law, and Sisterhood of the Traveling Pants; been nominated Best Female Vocal by the Chicago Music Awards (2012)