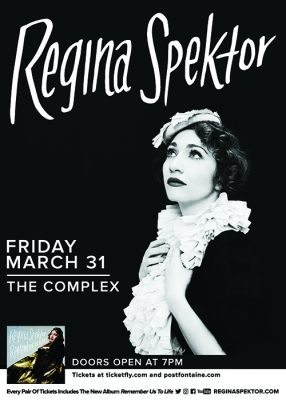 With every pair of tickets purchased for Regina Spektor you will receive one standard CD or digital version of the new album Remember Us To Life. You will receive album redemption instructions via email 24-48 hours after you purchase your tickets.

A veteran of New York’s anti-folk scene, songwriter Regina Spektor makes quirky, highly eclectic, but always personal music. Born and raised in Moscow until age nine, Spektor listened to her father’s bootleg tapes of Western pop and rock as a young child and also learned to play piano. She and her family moved from Russia to the Bronx, where she was immersed in American culture (at the time, hers was the first Russian family in the borough in 20 years). Eventually, Spektor and her family became part of a community that balanced her Russian Jewish roots with her new home’s culture. Meanwhile, she continued to practice piano anywhere she could, including at her synagogue, until her family got a piano of its own.

Spektor further developed her classical piano training by attending the SUNY Purchase Music Conservatory. During her studies, she was exposed to blues and jazz artists, including Billie Holiday. These sounds made such an impact on Spektor that they became a big part of her self-released 2001 debut album, 11:11. At the same time, she was also playing gigs anywhere she could in the city, in venues ranging from basements to parties to comedy clubs. On the strength of her frequent performances and another self-released album, 2002’s Songs, Spektor developed a following that included Alan Bezozi, They Might Be Giants’ drummer. He introduced Spektor to the Strokes’ producer, Gordon Raphael, and both worked with Spektor on her third album, Soviet Kitsch, in both New York and London (where she collaborated with the band Kill Kenada). Soviet Kitsch was initially self-released like her other work, but it eventually found a wider release with Sire Records.

Tours with the Strokes, Kings of Leon, Mates of State, and the Moldy Peaches’ Kimya Dawson further raised Spektor’s profile. She also toured the U.K., where the success of “Us” as a European single led to the release of the CD/DVD retrospective Mary Ann Meets the Gravediggers and Other Short Stories early in 2006. That summer, Begin to Hope, her first album of original material for Sire, arrived. Begin to Hope enjoyed popularity on both sides of the Atlantic and went gold in America, where it also cracked the Top 20. After taking several years to tour and compose new material, Spektor returned in 2009 with Far, which featured a bevy of star producers, including Jeff Lynne, David Kahne, Mike Elizondo, and Garret “Jacknife” Lee. Spektor’s first-ever live release, Live in London, was recorded and filmed at London’s legendary Hammersmith Apollo, and released in 2010. In summer 2011, Spektor reunited with Elizondo in Los Angeles to begin recording her next album, What We Saw from the Cheap Seats. The dark, driving single “All the Rowboats” arrived the following February, and the album itself was released in May 2012. Four years later, in 2016, Spektor returned with her seventh studio album, Remember Us to Life, which featured a full orchestra on select songs.