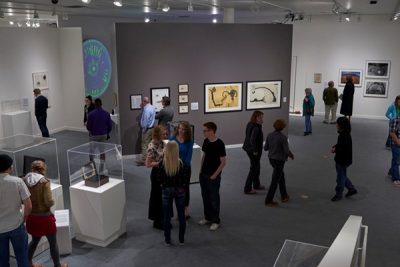 Museum and Music event at the Caine Performance Hall

April Concert: Zappa and Zappa: Counterculture California in the 1960s

By the 1960s California was the place to go if you felt yourself marginalized by postwar American culture and society. Artistically, this manifested in a blooming of avant-garde art and music reacting against the cultural mainstream. April’s concert features the music one of Southern California’s most iconoclastic musicians, Frank Zappa. His music is wildly creative, often offensive, and boldly impatient with tradition. It will be paired with the music of Francesco Zappa, an 18th century Italian composer active in Amsterdam. While not an innovator, Francesco’s music is tuneful and attractive. It belongs in this concert as an exemplar of another avant-garde movement based in San Francisco at the time, the historical performance of “early music.” These two evocations of Californian counterculture come together in Frank Zappa’s own electronic recording of Francesco’s music. They also have resonances in the visual work of the time, demonstrating the notion of counterculture and embodying a series of reactions against the mainstream, rather than an organized and coherent movement. This concert will be performed by students from USU’s Music Department.