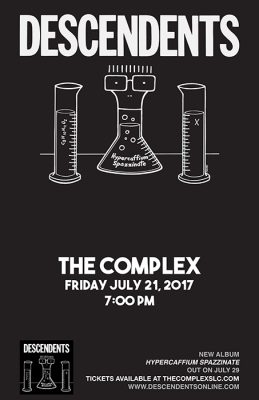 With that tongue-in-cheek battle cry, the nerdsome foursome declared their war against mediocrity. Fueled by the omni-ambitious doctrine of ALL (not ALL the band… that comes later the concept, based on the TOTAL EXTENT, the peak of pinnacles) and a series of caffeine binges, the essences of punk and pop were percolated together in a way that has yet to be recreated, though many have died trying. Ranks of sympathetic adolescents, previously excluded from the ferocious world of punk rock, followed the sound. They boldly strapped on their glasses, wiped their noses on their sleeves, and launched into the slam pit chanting the DESCENDENTS’ refrain “I’m not a loser” like a mantra.

In 1978 the DESCENDENTS formed under their common credo of fishing, girls and velocity. Existing briefly as a power trio, the LA-based group released the 7″ single Ride The Wild before recruiting a certain crop-haired honors class geek cum heartthrob (enter Milo Aukerman, he of the ubiquitous album illustrations) on vocals. They released the Fat EP in 1981, the only record in the DESCENDENTS’ expansive catalog that does not contain a single love song. The quintessential DESCENDENTS album, Milo Goes To College, hit local record stores in 1982. Its fusion of catchy melodies with raw, spastic energy (henceforward known as “power pop”, “melodic hardcore”, or the ever popular “pop punk”) caused the Los Angeles Times to write, “perfect for the little guy who was ever called a nerd and never got the girl. The Chain Saw pop combined with earthy humor conveys what is often an inarticulate rage.”

In 1982, Milo was seduced by the fast-track lifestyle of biochemistry and left for college. Bill Stevenson enrolled as full-time drummer with Redondo Beach punk founders Black Flag on a global mission to play every town with electricity. For two lean years, the world was without DESCENDENTS. In 1985, Milo and Bill returned to again unleash the roar of the over-stimulated, lovelorn dweeb. The band released the I Don’t Want To Grow Up LP, replete with lots of mushy “girl songs”. Rigorous touring ensued. 1986’s Enjoy! LP again broke new ground, not only as an archetype for the pop-punk genre, but more importantly, as the first recording to make musical use of high fidelity stereophonic flatulence. Now available in full digital clarity!

Each new DESCENDENTS record pushed further into the outer envelope of ALLness: faster, stronger, better. The guitar/bass tandem of Stephen Egerton and Karl Alvarez had what music teachers and Hit Parade magazine refer to as “killer chops”; that is to say, they wailed. In 1987, the band released its magnum opus ALL album, including the “ALL-o-Gistics”, a set of commandments useful in achieving ALL. Rigorous touring ensued once more. Two raging live albums were recorded, Liveage and Hallraker. The DESCENDENTS became legendary on the underground all-ages circuit, but continued to fall below the mainstream radar. In case the ‘80s are either a blur or a playground memory, here are a few highlights: Reaganomics, Rubik’s Cube, Members Only jackets, Duran Duran and Motley Crue. MTV and radio were clogged with glam metal and dance-y new wave, while punk rock remained a strictly volunteer proposition. The DESCENDENTS were self-managed, and produced their own albums on a shoestring budget.