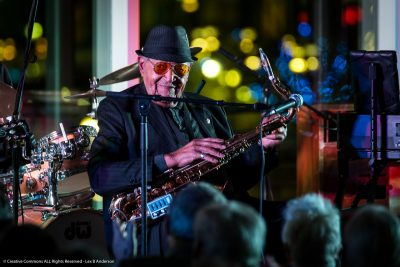 Presented by Excellence in the Community at The Gallivan Center

Joe McQueen was raised in Ardmore, Oklahoma. He played tuba, clarinet, and then saxophone in the Ardmore High School band. He was also on the football squad.
McQueen began playing professional jazz at the age of sixteen. He was introduced to the saxophone a few years earlier by his cousin, Herschel Evans, who played in Count Basie’s band in the mid-1930s.
In 1945, McQueen and his wife, Thelma, traveled to Ogden, Utah. He was at the time in a jazz band that dissolved when its leader gambled away the troupe’s earnings en route from Las Vegas.[2] McQueen reformed the band and stayed in Ogden.
Ogden, Utah, in the near post-World War II era was a hot spot for jazz music, as it was a major stop on the railroad route west to San Francisco, California from Kansas City and beyond. The city was mentioned in the beatnik writings of Jack Kerouac, and was the hometown of trumpeter Red Nichols.
During his life, McQueen has performed in Ogden with jazz luminaries such as Charlie Parker, Chet Baker (a fellow Oklahoman), Paul Gonsalves, Lester Young, Count Basie, Duke Ellington, Dizzy Gillespie, and others.[3] McQueen has toured as a musician in the Rocky Mountain West. He played in 1962 in Idaho Falls, Idaho with Hoagy Carmichael.
During his early years in Ogden, McQueen worked and played at the Porters and Waiters Club in Ogden.[4] This was one of the few venues open to black Americans at the time. McQueen was the first African-American in Utah to play at previously white-only establishments and to have a mixed-race band.
McQueen has worked as a truck mechanic and automotive technology instructor at Weber State University. As of 2005, he works as a full-time volunteer elder care worker; in this capacity he assists infirm senior citizens.
In 2002, the Governor of Utah established April 18 as an official “Joe McQueen Day” for the State of Utah.[4][5]
McQueen continues to perform live in clubs in Ogden and record at the age of 96.[6]
McQueen was recently the subject of a documentary film: “King of O-Town.”[3] He was also featured in a July, 2005 feature article by the Associated Press.