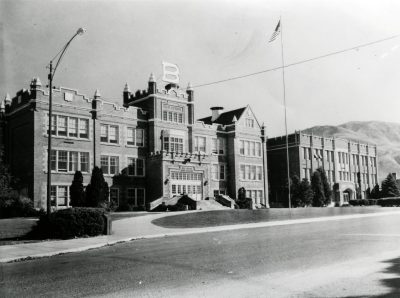 Just as school bells have evolved over time from a brass bell rung by hand to a computerized tone from a speaker system, education from pioneer days to the present has progressed dramatically. An historical exhibition featuring photographs and artifacts titled “From A to Z – Schools in Box Elder County, Past and Present” will be on show at the Brigham City Museum April 1 through June 10. Admission is free.

In March 1851, William Davis, his family and a few friends settled in Shoshone Indian Country near Box Elder Creek. Parents were the first educators in the area, and the Bible was their textbook. Two years later, Henry Evans, who was the first school teacher in Box Elder, walked from house to house teaching children their ABCs. In 1853, a log cabin schoolhouse was built next to the Box Elder Fort at 300 North and 200 West. Parents paid their children’s tuition directly to the teacher in cash or produce from their farms. A pioneer named Nels Madsen wrote, “[The teacher] received cash or carrots.” In 1861, religious leader Brigham Young asked William Watkins to teach all ages in the courthouse.

Young divided Box Elder, later named Brigham City, into four wards in August 1877 using Forest and Main streets as a focal point. Each ward was responsible for building a school and employing a teacher. Joseph Moroni Jenson was one of the teachers. The schools were named Webster, Whittier, Emerson and Columbia. A photo of each is in the exhibition.