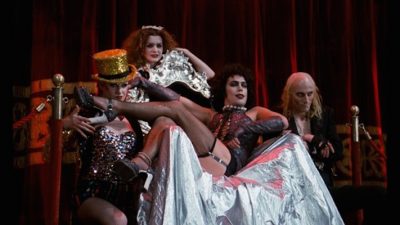 Is everyone ready to Time Warp again? You’d better be because Out of the Shadows Theater Group and the Salt Lake Film Society are pleased to bring you a special showing of The Rocky Horror Picture Show during the Greatest Musicals in the month of June.

Time to put on your corsets and fishnets and take that step to the right!! Join the The Latter Day Transvestites (SLC’s Rocky Horror Picture Show shadowcast) as we bring you the best (or worst) in absolute pleasure!!!! The Latter Day Transvestites have been feeding your Rocky Horror addiction since 1995 (officially). Come see the only officially sanctioned RHPS shadowcast in Utah.

Proceeds from ticket sales benefit the Salt Lake Film Society. A Tranny Pack (TM) will be included in the price of the ticket to the show and will include a squirt gun, newspaper, rice, toast, noisemaker, balloon, and cards.(no outside props that are food related will be allowed pursuant to the Tower management).

THIS MOVIE IS RATED R. According to Utah law, you must be at least 17 to see this performance unless you are accompanied by a parent or guardian.

NOTE: The RHPS and pre-show involve themes that may be inappropriate for children, and even for some particularly sensitive adults.

And don’t forget the Pelvic Thrust!