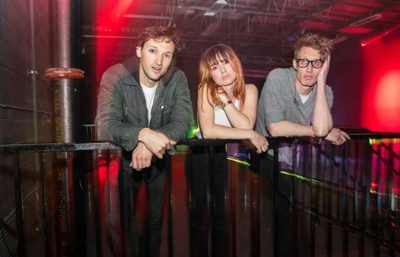 Le Voir with Mountains of Mirrors

Originally from Vermont, Chase began her music career in high school, writing songs on an acoustic guitar and covering Michelle Branch. Her first performance, naturally, was nerve-wracking. “I was so nervous. I stopped in the middle of the song and said, ‘Does that sound okay?’” Through practice and a love of performing, she found her artistic confidence and began playing bigger shows.

In 2006, Chase came to Utah to attend college. “When I got out here, I was still doing the acoustic thing,” she says. “And after I graduated college, I made a decision to devote myself to music, professionally, if I could.” She stayed in Utah and over the next few years performed at various venues in Salt Lake City and Park City. Around 2014, she started to develop a taste for and a desire to make electronica, influenced by the likes of M83 and The Naked and Famous. And, during a fortuitous stint in Park City, she met musician Rob Lyons, who introduced her to the music production software Ableton Live, which she says “opened the doors for the electronic stuff that I do now.”

Without a background in production, Chase started taking lessons from Derek Beck at Salt Lake DJ & Production. “Derek taught me the ins and outs of Ableton and what I needed to know about mixing, and how to make a good product.” So was born Le Voir, and their dark, pop-influenced electronica.