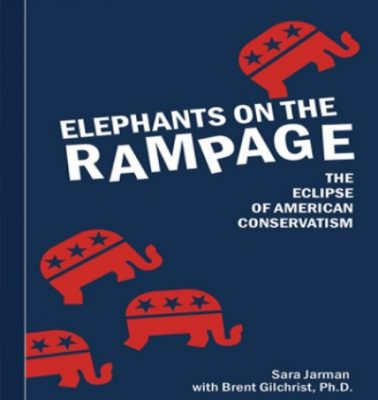 Sara Jarman Presents Elephants on the Rampage: The...

Join us as author Sara Jarman discusses and signs her incredibly pertinent book, Elephants on the Rampage: The Eclipse of American Conservatism.

In 2012, Sara Jarman wrote a thesis predicting the rise of a candidate like Donald Trump. Five years later, her prediction has become reality. Where too many believed the Republican Party was “too big to fail,” Jarman questioned the basic tenets of conservatism and the politics of those who call themselves conservatives.

In Elephants on the Rampage: The Eclipse of American Conservatism, she argues that an effective classical conservatism is necessary to the vitality of the American political system, but the Republican Party has moved away from the classical model, becoming increasingly more progressive in its attempts to redefine its political ideology. Now, American conservatives must grapple with the psychological and the practical struggle to redefine themselves. In this articulately written treatise, Sara Jarman tells their tale.