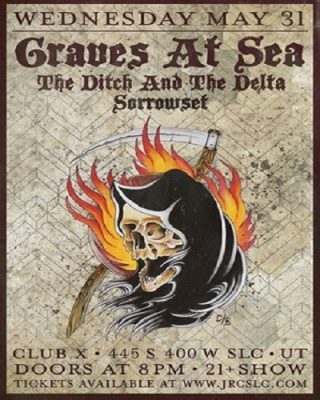 Graves at Sea with The Ditch and The Delta, and So...

Presented by Club X at Unknown

Sludge/doom quartet GRAVES AT SEA was formed in 2002 by friends Nick Phit and Nathan Misterek, with then-members Roger Williams and Steve Klatz (RIP). After self-releasing the demo Documents of Grief, they toured extensively and were quickly noticed by Greg Anderson of Southern Lord/Sunn, who released their 7″ Cirrohosis/Atavist Arise in 2004. Later in 2005 the band released a split with friends Asunder on Life is Abuse (CD) and 20 Buck Spin (vinyl). In 2007 GRAVES AT SEA went through a line up change when Nathan moved to Oakland and Nick moved to Portland, OR. In 2008, after playing two final shows with Chiyo Nukaga (Noothgrush) on drums and Miguel Veliz (ex-Sourvein, The Roller) on bass, the band broke up. Four years later, however, they decided to reunite with Chiyo on drums and Greg Wilkinson (Brainoil) on bass, but due to touring constraints, Chiyo and Greg decided to step down.