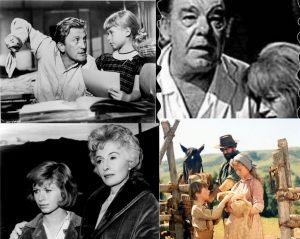 You know this face! It is Beverly Washburn, the renowned child actress you grew up with on TV and in the movies, who has more than 500 TV/film credits to her name. Actress and author, Beverly is touring her show, Beverly Washburn: My Hollywood, sharing stories, anecdotes, and behind-the-scene bits you haven’t heard until now. This live event of clips and conversations with Beverly is hosted by Kenny Chandler.

You’ll remember Beverly in famed films such as: Old Yeller, The Juggler, Shane, The Lone Ranger, and Here Comes the Groom. Some of the memorable TV shows she was in include Leave it to Beaver, The Jack Benny Program, Father Knows Best, Fury, Gidget, The Patty Duke Show, Wagon Train, The New Loretta Young Show, Dragnet, Streets of San Fransisco, Star Trek, Scarecrow & Mrs. King, Murder She Wrote, and so many more!

Beverly and Kenny will engage your curiosity by the mere fact that she has performed with legendary movie stars, personalities, and directors throughout her life, and has remained friends with most of them. Anyone who has worked with Beverly knows her to be a supremely talented, sweet, and loving actress, as evidenced by the numerous accolades she has received.

Center for the Arts at Kayenta

Parking is available surrounding the venue and in nearby satellite lots that serve the Coyote Village.