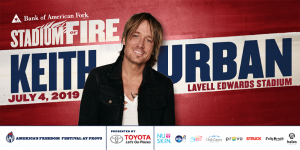 2019 Stadium of Fire with Keith Urban

One of the world’s biggest entertainers is set to headline one of America’s biggest Independence Day celebrations! The newly crowned 2018 CMA Entertainer of the Year Keith Urban will perform for the first time ever at the Bank of American Fork Stadium of Fire, Presented by Toyota, in Provo, Utah on July 4th, 2019.

In addition to Keith Urban, guests will enjoy a special appearance by popular actor and producer Chuck Norris, and an exciting stunt performance with the return of high-flying trampoline team Flippenout! All that plus the beloved Stadium of Fire Dancers, skydivers, a military flyover, and the largest stadium fireworks show in the United States!