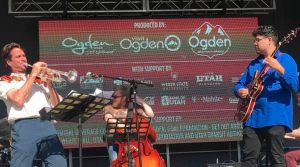 Jazz at the Station with Metro: Urban Jazz

Metro organizer Desean Bryan was born and raised in Harlem, New York. He is currently a sophomore Musical Performance major at WSU, where he performs with the WSU Jazz Ensemble and a WSU Jazz Combo. He started Metro in June 2018 ajd includes jazz friends he met at WSU. Metro was the featured entertainment at the 2018 Ogden Mayor’s Awards in the Arts Celebration. They were also a headliner at the recent Heritage Jazz Festival in conjunction with the Heritage 150 Celebrations in Ogden.

Jazz at the Station is sponsored by the Union Station Foundation, WSU Alumni Jazz, and grants from R.A.M.P., and Ogden City Arts. They are also sustained by donations from the audience jazz family.

Children are welcome as long as they do not disturb the performers or other audience members. Come early to make sure you have a seat. Jazz at the Station usually performs for standing-room-only audiences.