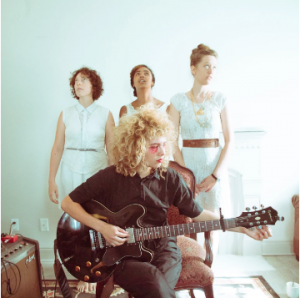 Tasche de la Rocha is a singer, songwriter, guitarist, and bandleader based in New Orleans, LA. Tasche grew up among a family of musicians and performers, and has been on stages since the age of seven. Since 2012, Ms. de la Rocha has performed on the streets of New Orleans. While many of these performances consisted of just Tasche and her guitar, she has recently assembled an eight-piece ensemble, Tasche & the Psychedelic Roses, for bigger shows at some of New Orleans’ most beloved venues. The Psychedelic Roses add a doo-wop flair and an R&B kick to Ms. de la Rocha’s songs, with three backing vocalists, two lead guitars, bass, and drums.

Her music evokes a sound that is both contemporary and vintage, blending psychedelic soul, love song, and dream pop. Whether performing solo or with the Psychedelic Roses, Ms. de la Rocha creates an intimate and magnetic atmosphere that pulls the audience in and makes them part of the experience. Tasche’s music has taken her on the road to many parts of the United States and Europe. Traveling and performing for audiences around the country has, in turn, added to the evolution and growth of her music.