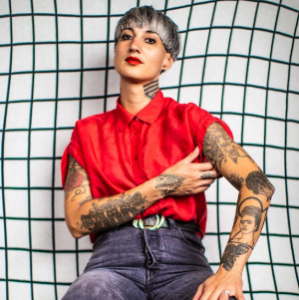 Y La Bamba is an enigmatic indie folk-pop project fronted and led by singer and songwriter Luz Elena Mendoza. The group’s sound weds Mexican folk styles — from mariachi, nueva cancion, and norteño to American folk-rock and dreamy indie pop. Mendoza sings in Spanish and English. Her parents hail from Mexico. Though born in San Francisco, she was raised in Southern Oregon and spent her childhood summers in California’s San Joaquin Valley with cousins. There Mendoza absorbed the melodies, three part-harmonies, and folktales of traditional Mexican mariachis. In 2003, she took a trip to India where she fell ill. It was there that she developed the expansive spiritual world view that would inform her future music.