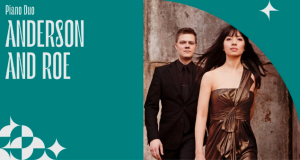 Known for their adrenalized performances, original compositions, and Emmy-nominated music videos, Greg Anderson & Elizabeth Joy Roe are revolutionizing the piano duo experience for the 21st century. Described as “the most dynamic duo of this generation” (San Francisco Classical Voice), “rock stars of the classical music world” (Miami Herald), and “the very model of complete 21st-century musicians” (The Washington Post), the Anderson & Roe Piano Duo aims to make classical music a relevant and powerful force in society. As Northwest Reverb observed, “[They make] a strong case that playing piano is the most fun thing that two people could ever do together.”