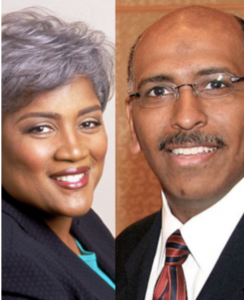 Veteran political strategist Donna Brazile is the former interim Chair of the Democratic National Committee (DNC) and the author of the New York Times bestseller Hacks: The Inside Story of the Break-Ins and Breakdowns That Put Donald Trump in the White House and the 2004 best-selling memoir Cooking with Grease: Stirring the Pots in American Politics. She is a co-author of For Colored Girls Who Have Considered Politics.

When he was elected Lt. Governor of Maryland in 2003, Michael Steele made history as the first African American elected to statewide office; and again with his subsequent chairmanship of the Republican National Committee in 2009. As chairman of the RNC, Michael Steele was charged with revitalizing the Republican Party. A self-described “Lincoln Republican,” under Steele’s leadership the RNC broke fundraising records (over $198 million raised during the 2010 Congressional cycle) and Republicans won 63 House seats, the biggest pickup since 1938. His commitment to grassroots organization and party building at the state and local levels produced 12 governorships and the greatest share of state legislative seats since 1928 (over 760 seats).