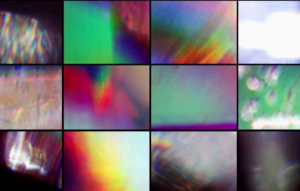 Photosites are light collectors. They are at the heart of every digital camera, and the only light-sensitive element utilized in digital imaging. If photography is defined as writing with light, then photosites are at least partially scribe.

Within each camera’s image sensor there are millions of them; minute, light sensitive, silicon chambers. They hold light, just for a moment, before converting it into a signal that is legible to our various electronic devices. McCarty makes images that document this last light before digitization. These instances–when light is simultaneously received, reflected, amplified, and absorbed–are usually “visible” to the camera alone.

Over a two-year period, McCarty collected image sensors from an array of disused and dismantled digital cameras. She then uses a microscope to capture images of these hidden sites that are responsible for translating light from the physical world into the digital realm. Photosite Array is a 12-channel video installation that chronicles her explorations to make these invisible processes within every digital camera visible.

Lisa McCarty is an artist, educator, and curator based in Dallas, Texas, where she is Assistant Professor of Photography at Southern Methodist University. A former librarian and archivist, her work explores disruptive technologies, communities, and philosophies across time.

McCarty has participated in over 70 exhibitions and screenings at venues such as the American University Museum, Amherst College’s Eli Marsh Gallery, Carnegie Museum of Art, Chicago Photography Center, Fruitlands Museum, Houston Center for Photography, McEvoy Foundation for the Arts, the Nasher Museum of Art, the Ogden Museum of Southern Art, and the Visual Studies Workshop. McCarty’s photographs have also been featured in a variety of international festivals including Noorderlicht, Internationale Photoszene Köln, Picture Berlin, and Sören Kierkegaard in Images, while her moving images have been screened at the New York Film Festival, Chicago Underground Film Festival, Experiments in Cinema, Cairo Video Festival, Encounters Short Film & Animation Festival, and Alchemy Film & Moving Image Festival.

Her first book as a contributing writer and editor, William Gedney: Only the Lonely, 1955-1984 (co-written with Gilles Mora and Margaret Sartor), was published by the University of Texas Press and Editions Hazan in 2017. Her first book of photographs, Transcendental Concord, was published by Radius Books in 2018. www.lisamccarty.com