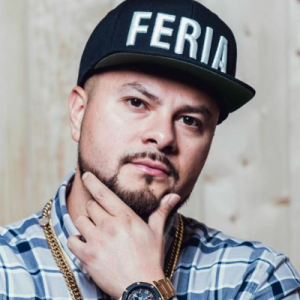 Pedro Herrera III is a rapper, actor, comedian, and entrepreneur born to Mexican emigrants who came to the U.S. to achieve the American Dream for themselves and their children. A native to Houston, Texas, Herrera entered the music industry in the early 2000’s as a premier underground rap artist under the Mexican/Chicano self-parodying alter ego ‘Chingo Bling,’ a over-the-top Mexican cowboy with an outrageous personal style that showed a juxtaposition between hip-hop and the Mexican/Tex-Mex culture. Known by a variety of punning nicknames––the “Ghetto Vaquero,” the “Tamale Kingpin,” the “Versace Mariachi”––Herrera has, over the course of the last decade, produced an extraordinary body of parodic music.