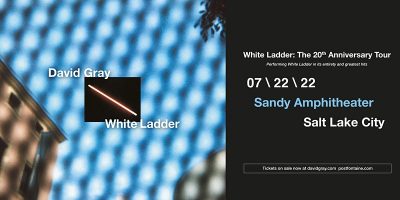 White Ladder was one in a million. It was a game changer, a life changer, the people’s choice blockbuster that launched a thousand troubadours. It may be the greatest ever word-of-mouth success in the history of the music business.

Recorded for no budget in a Stoke Newington bedroom in 1998 by a down on his luck singer-songwriter and self-released on a kitchen sink label, White Ladder slowly (very, very slowly) found an audience. It took a year to creep into the lower reaches of the British charts, then worked its way all the way up to number one. White Ladder eventually spent 3 years (from May 2000 to March 2003) in the UK top 100, spawning classic hit singles ‘Babylon’, ‘Please Forgive Me’ and ‘Sail Away’. It went on to sell over 7 million copies worldwide. It remains in the top 30 best-selling British albums of all time and is the best-selling album ever in Ireland (a nation who know a good song when they hear it).

Celebrating its 20th anniversary with an expanded edition, it is interesting to consider the extraordinary aftermath of White Ladder. “Apparently I have become the object of some study in the music business,” David Gray bemusedly noted at the time. “They want to know how did this peculiar fellow with an acoustic guitar make it all the way to the sacred ground of Top of the Pops?” His phenomenal success spawned a new wave of singer-songwriters in an acoustic boom that resonates to this day, a soul-baring lineage that can be directly traced from David Gray to the all-conquering Ed Sheeran. Indeed, Ed is a self-declared fan, whose passionate live version of ‘This Year’s Love’ can bring tears to the eye. Fellow world beating British superstar Adele is also an admirer, citing ‘This Year’s Love’ as one of her all-time favourite break-up songs.