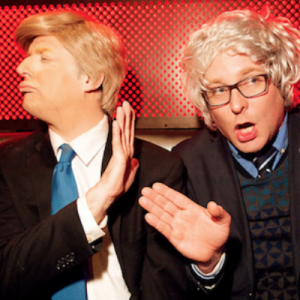 Trump VS Bernie is a hilarious live comedy experience that stars Anthony Atamanuik as Donald Trump and James Adomian as Bernie Sanders. The two debate in venues across America in a town hall-like setting where they go head to head on the most pressing issues facing America. In 2016, the duo release an album via Comedy Dynamics entitled Trump vs. Bernie: Live from Brooklyn, and also had a Fusion hour-special released that same year.