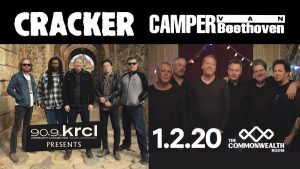 Cracker‘s tenth studio effort, the double-album entitled Berkeley To Bakersfield, finds this uniquely American band traversing two different sides of the California landscape – the northern Bay area and further down-state in Bakersfield. Best known for their blistering guitar solos and three-part harmonies, Buffalo Jones is a rock band based out of Spokane, Washington. After performing alongside acts like Cracker and Roger Clyne & the Peacemakers, Buffalo Jones released their first album, Wake Up. Struggle in 2008 and their second album, This is Not the End of the World in 2015. Their EP, We Woke Up And The World Had Changed was released in February 2017. Their upcoming release, Standing By was produced by David Lowery (Cracker/Camper Van Beethoven) and will be released this winter.