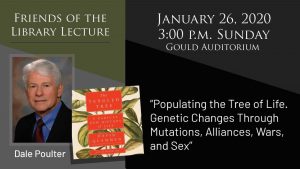 Dr. Dale Poulter, Ph.D. will discuss the struggle for survival through changes in DNA by mutations, alliances, wars, and sex has added unanticipated complexity to the tree of life

Dr. Poulter received his BS degree at LSU and his PhD from UC Berkeley. After two years as a NIH Postdoctoral Fellow at UCLA, he joined the faculty at the University of Utah as an Assistant Professor of Chemistry. Poulter is the John A. Widtsoe Distinguished Professor Emeritus at the U. His research in the area of Biological Chemistry focused on the relationship between the structures of proteins and their functions, including how new functions evolved as genes for the proteins mutated. He has served in several editorial roles, including Editor-in-Chief of the Journal of Organic Chemistry. He is a Rosenblatt Fellow at the University of Utah, a fellow of the American Chemical Society, a fellow of American Association for the Advancement of Science, a member of the American Academy of Arts and Sciences, and a member of the National Academy of Sciences.