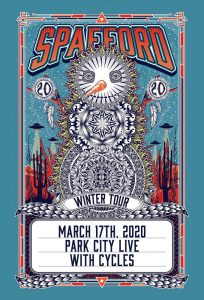 MARCH  16, 2020:   Due to the current Coronavirus outbreak, for the safety and health of our employees and patrons, Park City Live has postponed our upcoming shows through March,

Spafford is an American jam band that blends genres of rock, funk, jazz, reggae, ska, and electro-pop. Members Brian Moss (guitar/vocals) and Jordan Fairless (bass/vocals) formed Spafford in Prescott, Arizona on New Year’s Eve in 2009. Andrew “Red” Johnson (keys/vocals) joined Moss and Fairless after meeting the duo at an open mic night in Prescott. Cameron Laforest (drums/percussion/vocals) was the last addition of this current formation until Spafford and Cam went their separate ways April 2019. Spafford’s previous drummer, Nick Tkachyk, returned to the band at this point. The group self-releases their music, many of which are soundboard recordings of their live shows.