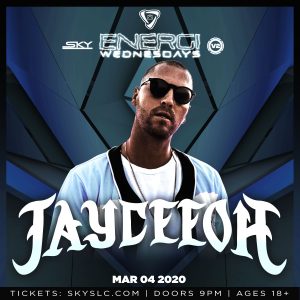 The multifaceted artist Jayceeoh had his biggest year to date in 2018 with major performances at EDC Las Vegas, EDC China (X2), EDC Orlando, Beyond Wonderland, Red Rocks, an international tour of Australia and New Zealand, and a winter tour with Hippie Sabotage to name a few. Never one to slow down with success he has two major projects releasing in the first half of 2019.s.

Jayceeoh has multiple touch points in the game at all times. His catalogue is as deep as it is diverse, with releases on Spinnin, Armada, Dim Mak, Disciple, Deadbeats, Circus Records, and Thrive Records. His latest release “Level UP” on Disciple Records has been seeing a huge amount of support across the dance music community, and his next solo EP is set to start releasing in April 2019 on Circus Records.

Jayceeoh also has a new super group called 1000volts with rap icon Redman. The two artists have created a new hybrid of Hip Hop & Bass Music like no group has done before. They’re recent collaboration with EDM heavyweights Zeds Dead has over 2 million streams on Spotify. The pair just released their new single under Zeds Dead’s label “Deadbeats” as a collaboration rising star Dion Timmer and the legendary Kid Capri. Be on the lookout for their debut EP on Deadbeats Records in 2019.

Jayceeoh is the curator of the Super 7 mixtape series which is one the most influential mixtapes in dance music to date. He partnered with Insomniac on the series in 2017 and has released vol 7 – 10 under their umbrella. He also hosts a monthly mix series called the Double Up featuring up and coming artists from different genres in the dance world.

Jayceeoh is world renowned turntablist who won VH1’s Master Of The Mix TV Show & Competition in 2013. You can see him flex these skills in his “Practice Cuts” series on Facebook and Instagram where he blends bass music and hip hop flawlessly through live edits and routines that are unrivaled in the bass world. The series has over 30 episodes and counting with millions of plays across platforms.