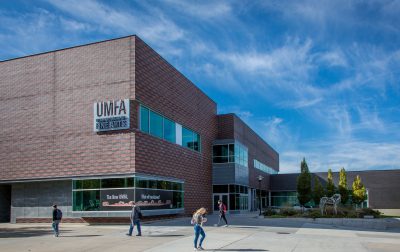 Beyond the Divide: Merchant, Artist, Samurai in Ed...

Experience Edo-period Japan and its beautiful scrolls, screen dividers, sculpture, prints, and samurai armor and weapons from the UMFA’s vibrant collection of Japanese art. Edo artists filled residences of elite samurai and rising merchant classes alike with artworks that fused old and new inspiration, effectively defining this storied era (1603–1868). Such objects were typically hidden from public view behind decorated screen dividers—called byobu—in private homes during this time. Beyond the Divide is the first major presentation of Japanese objects from the UMFA’s collection in more than a decade.

The UMFA also presents Seven Masters: 20th-Century Japanese Woodblock Prints, an exhibition showcasing a new art form (shin hanga) developed by a small group of artists in response to Japan’s rapid Westernization and industrialization. Shin hanga mingled the old with the new, creating beautiful, enticing pictures that were widely reproduced as prints of almost unsurpassed quality. The exhibition, drawn from the superb collection at the Minneapolis Institute of Art, focuses on seven artists who played a significant role in the development of the new print, and whose works boldly exemplify this new movement. Seven Masters is on view February 6 through April 26.

More about Beyond the Divide
Japan’s Edo period (1603–1868) was a time of rapid cultural expansion. Its growing cities and cash economy led to a high patronage of the arts. Within Japan’s strict class system, supporting the arts became a way to distinguish oneself.

Samurai, the highest class, embraced art with traditional subject matter that reflected their philosophy to balance arms and culture. Merchants, who held the lowest social status but gained great wealth in this age, began supporting new artistic movements alongside established schools to demonstrate their own rising status. Artists and artisans, occupying a middle ranking, enjoyed greater prestige from increased support. Some even became more famous than the studios that trained them.

The screen and scroll paintings, arms and armor, sculpture, and color woodblock prints in Beyond the Divide represent a coming together of the three classes to create one of Japan’s most diverse periods of artistic expression.