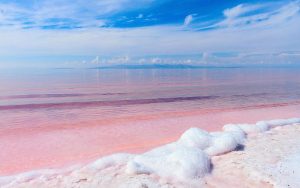 For the past fifty years, Box Elder County, Utah, has been home to the world’s most iconic earthwork, Robert Smithson’s Spiral Jetty. In the late 1960s, innovative artists began to venture outside of urban art centers to create monumental sculptures, called earthworks or Land art, in the remote landscapes of the American West. In April 1970, the New York-based artist Robert Smithson (American, 1938–1973) and a Utah construction crew used earthmoving equipment to create a 15-foot-wide spiral of black basalt rocks and earth jutting more than 1,500 feet into the Great Salt Lake. However, in 1972 the lake’s water level rose, submerging Spiral Jetty for three decades. In 2002, the earthwork emerged, and today it sits far from the water’s edge, which has receded due to drought and water diversion projects.

At the time of its creation, Smithson invited Italian photographer Gianfranco Gorgoni (1941–2019) to document the construction of Spiral Jetty. Because it was hidden from view for so long shortly after its construction, the public largely experienced the earthwork through Gorgoni’s photographs. Once it became visible again, Gorgoni returned to Spiral Jetty on his own accord, repeatedly making the pilgrimage to photograph the changes in the earthwork over time, a unique aspect that is central to the work. This exhibition features the ten digital prints from Gorgoni’s portfolio Spiral Jetty Photographs, 1970–2014, which is part of the UMFA’s permanent collection. Visitors to the exhibition will not only see these beautiful photographs but also be encouraged to share their memories of and future hopes for this significant artwork that is such a special part of our community.