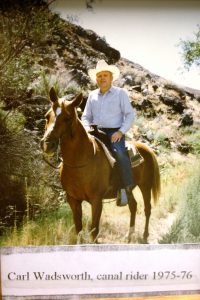 Until further notice the Museum will remain closed due to the Corona Virus. Trails are still open when buildings are closed. You are free to walk them on your own with the provided guide. Please stay out of the ruins.and the yards of nearby residences to the north of this historic site.

If you’re interested in Washington County history, come listen to local historian and author Reuben Wadsworth talk about two aspects of the area’s history that are not well known: Smith Mesa and the Hurricane Canal ditch riders.

Smith Mesa was one of the last places in the U.S. to be homesteaded and the farmers who homesteaded there had a rough go of it – but at least they had scenery going for them as it sits on the Western border of today’s Zion National Park.

In the many accounts available on the canal’s history, very little is written about the men who were integral in keeping the canal running after it was built, the ditch riders as they were known. They rode the canal to check on it from Day One.

Being a ditch rider was a 24 hour a day, seven days a week job. A ditch rider’s main concern was to make sure the canal was flowing properly and to check for leaks, especially the portion of the canal up the canyon, which didn’t have the advantage of people living below it to report any problems as the portion above town did.

ABOUT THE PRESENTER:  Reuben Wadsworth
A Southern Utah native who grew up in Bountiful, Utah, Reuben Wadsworth is a national parks, Italy and history aficionado. Mr. Wadsworth is an Aggie through and through, having graduated from Utah State University with a Bachelor’s in journalism. While there, he served first as a sports writer and then as assistant sports editor for the Utah Statesman While his day job is a middle school English teacher at Hurricane Middle School, he just couldn’t leave journalism behind and started as a contributing writer at St. George News in 2013. He holds a Master’s degree in history from UNLV where he wrote his thesis on the history of the Zion National Park shuttle system. He moonlights as an adjunct history instructor at Dixie State University.