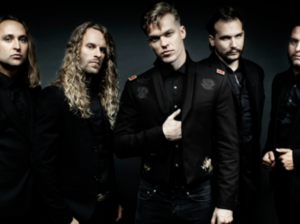 It all boils down to a mantra. The final gasp of Toothgrinder’s third full-length album, I Am , sums up everything before it. On the concluding title track “I AM,” vocalist Justin Matthews meditatively sings out, “I will make peace with all I am,” over the seesawing snap of distorted guitars, a driving beat, and orchestral bells. This simple phrase serves as both a victory lap and an assessment of the band’s current place personally and creatively. “I feel like that line is the mission statement or the theme of the entire record,” he affirms. “For me, I’m finally making peace with myself. So, the mantra just seemed very fitting for the title as it’s a guided meditation I’ve used to get me through a lot.” A turbulent two-year journey built towards that important realization. Challenging convention, existing independent of genre expectations, and delivering a hypnotic, haunting, and hard-hitting alchemy of rock, alternative, and metal, Toothgrinder—Justin , Jason Goss , Matt Arensdorf , Wills Weller , and Johnuel Hasney —set a precedent as outliers. On the heels of 2016’s debut Nocturnal Masquerade, they ascended to new creative heights on Phantom Amour a year later. Not only did the latter yield three million cumulative streams on Spotify, but it also garnered widespread acclaim from Revolver, AXS, MetalInjection, MetalSucks, Echoes and Dust, and Metal Hammer who dubbed it “impossible to pigeonhole.” Following standout tours with the likes of Meshuggah and Code Orange, they capped off 2018 with a surprise cover of Fleetwood Mac’s “The Chain,” amassing 1.8 million Spotify streams. Along the way, they dove into writing what would become I Am as Justin faced down personal demons. The result of his journey impacted the direction of the music. “My alcohol and drug use were pretty prominent on the last two albums and on tour,” he admits. “I resolved those issues in the last year-and-a-half. I’ve cleared the vines, got over resentments, let go of hatred, and tried to live a more balanced life. Afterwards, I was in a better state of mind writing the lyrics. On Phantom Amour, I was talking about my problems. On the latest album, it’s like I’m solving them. I’m more comfortable in my own skin and aiming to be a better person in society instead of trying to dig my way out. It’s more uplifting.” “On the sonic side, every song is a little different adventure,” adds Wills. “There are surprises throughout. Tonally, it’s more positive and exciting. It continues the ever-changing style as we try to push ourselves to the next level and hone our songwriting.” In order to elevate the craft, they recorded with producer Matt Squire in Maryland. Over the course of five weeks, the band zeroed in on eleven tracks and leveraged the producer’s “ear for song structure and melody” to tighten the sound like never before. “Song structure was what we really concentrated on this time,” Wills continues. “Some of the records Matt has made changed my view of music. He did an amazing job of helping us sharpen everything.” They fittingly introduce the record with “I Am” as the first single. Conceived in Wills’s kitchen, hummable guitars underscore the overarching message. According to Wills, it “stems from the enjoyment of making music together.” Elsewhere, “Oh My My” fuses clean riffing to a steady beat as Justin’s voice reaches impressive heights on the hook before a searing solo and call-and-response chant. “It’s about things I’ve dealt with in the last couple years,” the vocalist goes on. “Relationships fall apart. Infidelity happens. You come to terms with what you knew was inevitably going to happen and pick up the pieces.” A dreamy swell bleeds into emotionally charged verses on “My Favorite Hurt,” which “is about being able to forgive and make amends.” As Wills puts it, the boys flip their “middle finger” to judgmental musical purists on “too soft for the scene, TOO MEAN FOR THE GREEN” delivering a potent, punishing, and powerful punked-up clarion call in the process. “We’re always in a weird spot,” explains Wills. “We’re either the softest band on the death metal bill or the heaviest band on the rock bill. There’s never a right move, and we don’t fit in. However, it’s who we are.” Meanwhile, “No Surrender In The House of Leaves” descends from acoustic strumming into a stark confession. “In order to really live a happy and fulfilling life, you need to surrender to things you don’t have control of,” Justin continues. “I was unable to do that for a long time. I was reading House of Leaves by Mark Z. Danielewski a few years ago. When I finally understood the concept of surrendering, it reminded me of the book where there’s a never-ending basement you can’t come out of.” In the end, Toothgrinder’s mantra exhibits the power to resonate. “I hope people feel a sense of community, when they listen to this,” Wills leaves off. “You have a place and a voice.” Justin adds, “If fans are struggling with depression, addiction, or alcoholism, I hope they reach out. We’re always here. I AM is a reminder for everyone.”