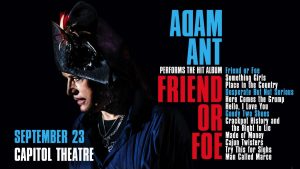 Presented by Live at the Eccles at Capitol Theatre

Adam Ant at Eccles Theater on May 6, 2020 has been rescheduled to September 23rd at Capitol Theatre.

Adam Ant will play his landmark “Friend or Foe” album in its entirety as well as classic chart-topping singles and personal favorites. The “Friend or Foe” album was Adam’s first release as a solo artist and included three hit singles. The massive hit “Goody Two Shoes” reached #1 in the UK, was also #1 in Australia and hit #6 on the USA Billboard Chart.