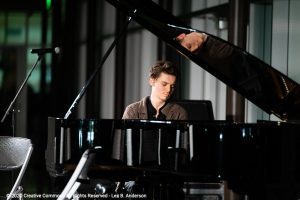 This is a live-stream concert from the Gallivan Center! Tune in to our Facebook page on Wednesday evening to listen live!

Daniel Tselyakov has been acclaimed as “…one of several young musicians in a deep pipeline of keyboard talent coming out of Canada.” (Natasha Gauthier, Artsfile) and “Daniel plays as a nightingale sings with all that he is and all who listen are enthralled for the love it” (Virtuosi Concert Series). Born into a musical family, Daniel began his piano studies at the age of five with his father, pianist Alexander Tselyakov and made his first public performance with Tchaikovsky’s Children’s Album at age six. In April 2014, he debuted at the Kennedy Center in Washington. He was the youngest musician ever to be invited as a guest artist with Winnipeg’s Virtuosi Concerts (performing four times) and had earlier performed Chopin’s Piano Concerto No. 2 as guest soloist with the Penderecki String Quartet.

He has appeared as a soloist with the Winnipeg Symphony Orchestra, the Canadian Sinfonietta and the San Luis Potosi Symphony Orchestra, Mexico. He was a prize-winner in several competitions including Livorno Competition in Italy and San Jose Piano in USA], and has also performed in several International Festivals such as the Festival of the Sound in Perry Sound (named Stockey’s Young Artist 2020), Music and Beyond in Ottawa, Clear Lake, Agassiz, Texas, and Gijon Piano Festival.

Hannah Linz joined Utah Symphony in 2017. Previously, she performed with the Dallas Symphony as a Jaap van Zweden Scholar for two seasons. Hannah has also performed with the Philadelphia Orchestra, most recently joining them on their 2017 Asia Tour. She has been the first prize winner of competitions including the Indiana University Jacobs School of Music’s Violin Concerto Competition, the Marquette Symphony Orchestra Concerto Competition for Strings, and the Lansing Symphony Concerto Competition. Hannah has been a participant in many summer festivals including Kent/Blossom, The Quartet Program, Schleswig-Holstein, Boston University Tanglewood Institute, and Summit Music Festival.