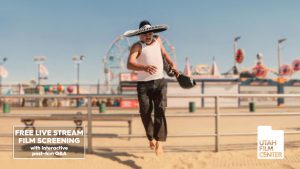 In Brooklyn, an undocumented Mexican immigrant working three low-paying jobs and sending the bulk of his earnings to his wife and children in Mexico decides to return home to the family he hasn’t seen in almost two decades.

Directed by Lindsey Cordero and Armando Croda
74 min | 2018 | USA/Mexico | Not Rated
Presented in Spanish and English with Spanish and English subtitles.
Post-film Q&A with the film’s directors and producer Josh Alexander.
A modern-day odyssey, I’m Leaving Now follows Felipe—a charismatic, undocumented Mexican immigrant who has reached a crossroads: after 16 years in Brooklyn, working three low-paying jobs and sending the bulk of his earnings to his wife and children in Mexico, he’s decided to return home to the family he hasn’t seen in almost two decades. But when he informs them of his plans, he discovers that they’ve squandered the money, are deeply in debt, and don’t want him to return. They need him to stay in the U.S. and continue to earn.

Shot over two years in the heart of Brooklyn’s immigrant community, I’m Leaving Now brings a warm humanity to one of the most pressing political issues of our time, without sentimentalizing or trivializing its protagonist. The film updates the traditional migration tale—at a time when Mexican net migration has fallen to zero, and more Americans are migrating to Mexico than the other way around—and subtly challenges our ideas of the American dream through the character of Felipe, a man looking for that dream back home. In allowing the rhythms, emotions, and sounds of Felipe’s day-to-day life to drive the story, Cordero and Croda open an impressionistic, cinematic window onto a life that might otherwise remain unseen.