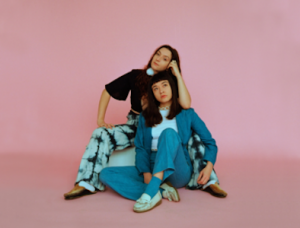 The OHMME event has been cancelled.

There’s an obvious chemistry emanating throughout Ohmme’s music that’s so tangible it can only come from a decades-spanning friendship. Songwriters Sima Cunnningham and Macie Stewart formed their unbreakable bond performing throughout the fringes of Chicago’s many interlocking communities, collaborating with titans from the city’s indie rock, hip-hop, and improvised worlds. But together, along with drummer Matt Carroll, they’ve stretched the boundaries of what guitar music can do starting with the band’s experimental 2016 self-titled EP and their adventurous debut 2018 LP Parts. Now their longstanding partnership culminates with the stunning and muscular follow-up Fantasize Your Ghost.

Ohmme formed in 2014 as an outlet for Cunningham and Stewart to explore an unconventional approach to their instruments. “That’s the whole genesis of the band: us walking up to our guitars and saying, ‘how can we make this noisemaker do something different?’” says Cunningham. But as their musical collaboration strengthened, bringing Parts and intensive tours with acts like Wilco, Iron & Wine, Twin Peaks, and more, the band’s scope and focus has also broadened. Fantasize Your Ghost is the direct result of the band spending more time on the road than in Chicago, a record deeply concerned with questions of the self, the future, and what home means when you’re travelling all the time.