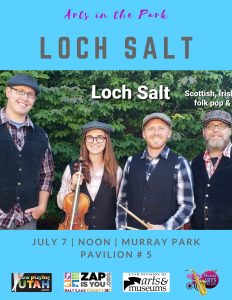 Loch Salt is Salt Lake City’s premier Celtic, Scottish & Irish Folk & Pop band. They play the traditional music of the culture as well as popular known tunes in the genre.

Part of the songs they play is a tribute to the Scottish born Harry Lauder, who was Great Britain’s most popular recording artist during the early century. Lauder had a 40 year legacy as the UK’s top performer and was knighted and made an ambassador.

Other recognized songs Loch Salt plays are well known traditional national themes such as “Loch Lomond” from Scotland, and Danby Boy from Ireland. All of these songs have a twist in the rearrangement made to accommodate the current century palate and genres. You will love the fun, upbeat and family friendly music of Loch Salt!