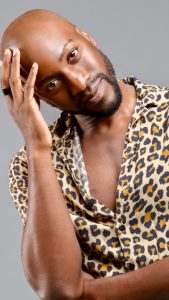 Join us on July 16 at 5:30 for a very special Town Hall event with comedian, Sampson McCormick. We will view Sampson’s documentary followed by a live Q and A session with Mr. McCormick, moderated by Jennifer Nicole, Chair, Utah People of Color and Allies.

As our nation faces some of it’s greatest and tense challenges seen in history, it’s important for us to remember to continue having dialogue amongst each other, in order to conquer the fear that what we’ve seen in media, been taught or perceive, so that we are able to move forward collectively and in unity to ensure a more peaceful and equitable country and world. After viewing the film, “A Tough Act To Follow” that looks at the challenges that minorities face in regards to representation in media, we’ll engage with the filmmaker, award winning comedy veteran and writer Sampson McCormick in dialogue that puts all of our collective concerns around race, politics and queer identity on the table to dissect with humor and honesty, to allow us things to consider and encourage a more unified world of opportunity and equality.