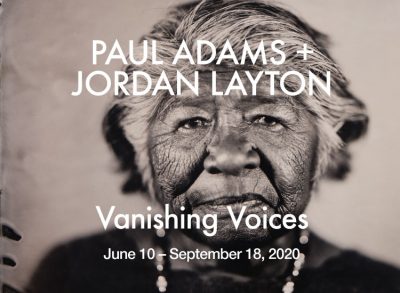 Granary Arts invites you to join us for “Vanishing Voices” an exhibition by artists Paul Adams and Jordan Layton, June 10 – September 18, 2020

Granary Arts invites you to join us for Vanishing Voices an exhibition by artists Paul Adams and Jordan Layton.
On view Wednesday, June 10 – Friday, September 18, 2020

Vanishing Voices
One language dies every 14 days. By the next century nearly half of the approximate 7,000 languages spoken on Earth will disappear. In the United States there are 866 endangered languages. In an increasingly globalized and homogenized era, language follows power. The most spoken languages dominate world communication and commerce, jumping geopolitical borders and geographical boundaries, pushing less spoken languages toward extinction. These languages preserve priceless cultural heritage, and some hold unexpected value — linguistic nuances which convey unparalleled knowledge of the natural world.
These are portraits of the last native speakers of endangered Native American languages and the landscapes they inhabit. The images were made using a 20×24” view camera and the 19th century wet collodion tintype process. Each portrait is one-of-a-kind, much like the people being photographed. A Civil-War era process, it is one of the most permanent of all photographic printing methods. The portraits created in Vanishing Voices will long outlast the dying native languages of the subjects. With 74 languages in the United States critically endangered, these images serve as a haunting record of the last speakers.

ABOUT THE ARTISTS
Paul Adams has been photographing for over 40 years. Adams was born and raised in the Pacific Northwest and grew up backpacking and exploring the nearby coastal ranges as well as running rivers above the Arctic Circle in Alaska. He was awarded a Masters of Photography in 1996 and has taught photography at Utah State University, the Florida Keys, and Brigham Young University. He lived in Europe as a Fulbright scholar and taught photography in Northern England. Adams has had his work displayed both nationally and internationally including The National Portrait Gallery of the Smithsonian, and his photographs are included in several permanent collections including the Nora Eccles Museum of Fine Art, Chattahoochee Valley Art Museum, The Chicago Institute of Art, and Brigham Young University Art Museum. Adams is a professor of photography at Brigham Young University.
Visit his website at pauladamsphotography.com or follow him on Instagram @adams.p.photo
Jordan Layton was born and raised in northern Alabama before receiving his BFA in Photography from Brigham Young University. Since graduation, he has worked as a commercial photographer and art director in both New York City and Los Angeles where he currently resides with his wife and their golden retriever puppy.
Visit his website at jordanlayton.com or follow him on Instagram @jordanlayton